Now that Nashville is the “It City” we’ve became famous for our hot chicken, live music, and the show named after us. But we are so much more. Our city played a pivotal role in the Civil Rights Movement adding to the richness of black history in Nashville. And the early wins in integration here paved the way for the wins across the Nation. Dr. King even called Nashville ‘The Model Movement.’

The sad thing is, I’ve lived here my whole life and never knew any of this until the spring of last year. I saw Selma and knew I needed to get conscious.

Having acquired all this newfound knowledge on the history of my hometown, I asked my family to do the Civil Rights Walking Tour. Our ages range from 16-65…so we motivated them a bit by awarding a cash prize to the person that remembered the most facts. I am not above bribery, y’all.

The Nashville Civil Rights Movement Walking and Driving Tour was published by Historic Nashville, Inc. The guide book explains the six stages of The Movement, lists the location and significance of twenty-nine historical sites, and includes a map. The tour is large and would probably take a day to complete.

So we focused on the downtown sites within walking distance of the Main Nashville Public Library. We started our walk at the Nashville Civil Rights Room in the Library (it’s designed to look like a lunch counter at the center) and visited ten sites. The site numbers coincide with the walking tour map. 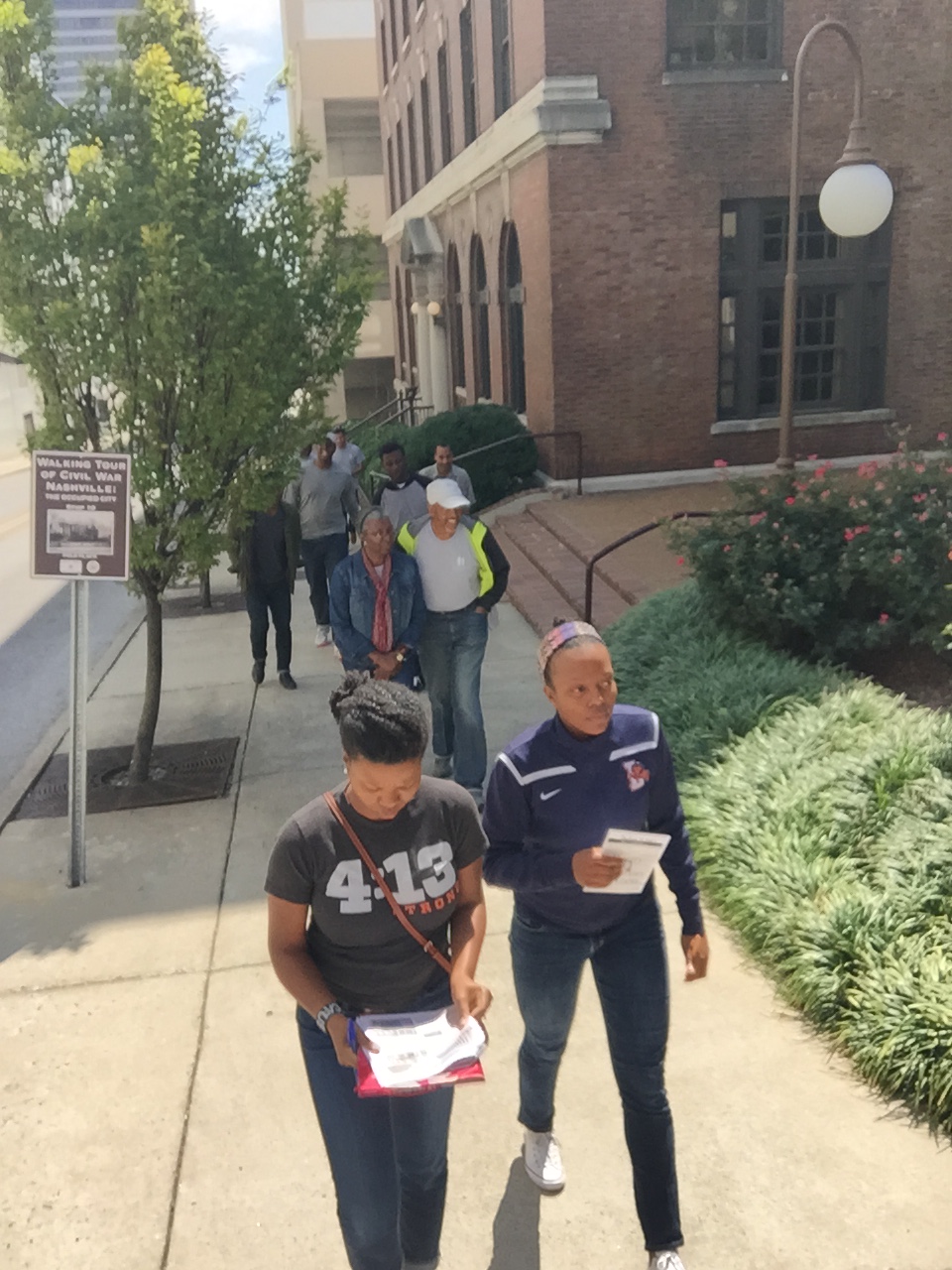 The Doctor’s Building was the first integrated medical clinic opened in 1947. The building superintendent told us that there are a series of underground passages that were used to get black patients into the office. But we did not investigate that.

Cain-Sloan Department Store (now Puckett’s Grocery and Restaurant) was the target of sit-ins during February of 1960 and one of the first to succumb to the pressure of protesters.  And my mom told us that it was one of the stores she modeled for when she moved to Nashville in the eighties.

The Nashville Christian Leadership Council organized weekly mass community meetings at the War Memorial Building to keep  everyone aware of the progress and desegregation issues. And my dad shared that’s where he first held prayer meetings to address the issue of fatherhood in the nineties.

At the end of the tour, my little sister won the quiz. She’s a college student and takes prize money very seriously. But the highlight for me was remembering all the work my elders did, retracing their footsteps, and realizing I am still reaping the benefits of their labor.

So take the tour and remember all that Nashvillians did for The Movement.

Insider Tour Tips Time: 90 minutes to two hours (with a large group) Parking: Park at the Nashville Public Library and see the Civil Rights Room. The first 90 minutes of parking are free with library validation. Then begin the walking tour one block away at Site No. 6. Cost: Free Value: Priceless

A Little Extra History from Simone:

So I started reading, Walking with the Wind. It’s the biography of Honorable Representative John Lewis, and he dedicates three chapters of his book to the role Nashville played in The Movement. He recounts: